China’s heavily industrial economy is churning through masses of resources every year. It’s economy is reliant on the consumption of these raw resources and minerals in order for it to grow, and with it consuming more than it can produce and import, China has set its vision onto Africa as a way to create a sustainable flow of resources, to fuel its economy.

China has been showing an interest in Africa for decades. Since 1970 half of all of Chinese foreign aid has gone to African nations and with large amounts of much needed infrastructure being built and sponsored by Chinese companies, it appears that this new form of ‘neo-colonisation’, is mutually beneficial to some extent; with China getting the much needed resources that drive it’s economy, and African nations gaining a steady income from taxes, much needed jobs and investment into their outdated infrastructures. However, this investment in infrastructure, in-particular the creation of rail lines and transportation hubs is an unfortunate similarity of the ‘investment’ of early European colonisers, who only put this infrastructure in place to aid them in extracting the natural resources from these countries. China has also created a hold on many African countries with loans of up to 1/3 of a nations GDP. These countries can’t clearly pay back these loans on the finance plans they’ve been given. In turn, China offers these African countries ways to pay with further exclusive land and mineral rights. As well as this with China is securing large stakes in real estate, banking and resource management within Africa. Any economic developments within these countries will greatly benefit China, far more than the unpaid loans and cost of the infrastructure that China has put in place there. China has also relocated an estimated 1,000,000 workers to Africa with and aim to send 300,000,000 in the coming years to try and address the overpopulation and pollution, that modern China is now facing.

China may have also heavily invested in the minerals and raw materials in Africa to prevent competition in the manufacturing industry. By providing the infrastructure to mine resources and constantly investing in the industry not only does it provide China with a constant flow of resources, it also reduces the incentives for African nations to invest in the manufacturing industry themselves. This means China has a further control on the market and can use its influence on any African countries sovereign debt to ‘persuade’ them to think of other options when considering joining the manufacturing industry. It seems many African nations have sold their rights of in the hope for a quick profit and not thinking of the future. The lack of wealth and the ability to build these mining facilities themselves, has lead to a these countries signing undervalued contracts for their nations raw resources.

As well as this, workers are being paid up to £1 a day to extract the raw materials from the ground, by working in the mines. Showing China is not interested in helping these African nations from escaping poverty, but is in fact trying to purely look after it’s own interests. This is preventing Africans from escaping the poverty trap and proving cheap labor for Chinese companies. With these savings passed down the line, this will improve the quality of life for Chinese workers and citizens, echoing the effects of European colonisation.

President Trump’s agenda on inward investment into the USA has also been predicted to help finalise China’s’ stronghold position in Africa, by Mining experts in attendance at the South African annual four-day, ‘Investing in Africa’ mining conference. With the USA reducing it’s investment into Africa it has left China free to sweep up any contracts it cares for without any major competition. This will lead to cheaper contracts for China, as well as the ability to spread its vision over Africa without the competition of another world superpower. One hour after this was initially published, President Trump announced the US would impose tarrifs of 25% on Steel and 10% on Aluminium from abroad. This will significantly reduce the attractiveness of any US corporations from investing in these raw materials in Africa, further weakening any US economic foothold in the continent. 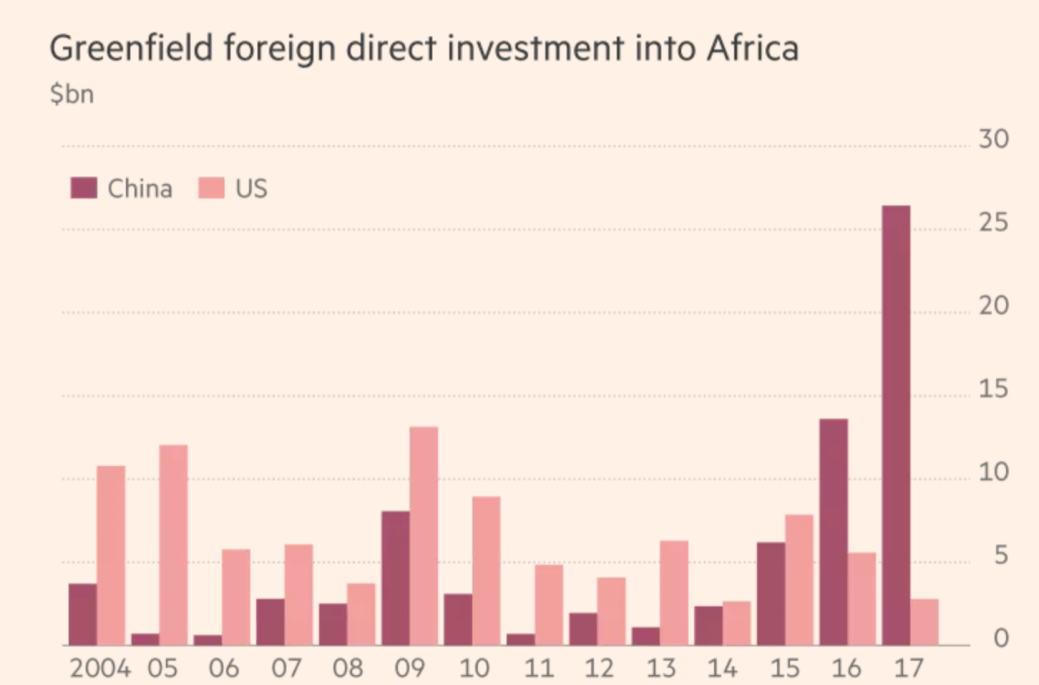 China can also use the debt created for African nations from the high stake loans, alongside the infrastructure and further loans to gain leveraged with a nation via its sovereign debts. The political power China will gain from these nations is far more valuable than the money that has been invested. In turn this will ensure that China always has a growing influence in international politics and trade. With China using Africa to cement its position on the world stage and increase its wealth and global political standing, it shows that China’s agenda on Africa can be easily compared to that of any previous European colonial overlord. A further similarity, is that of China deploying ‘peacekeeper’ forces around Africa to protect their investments, and the recent opening of the first Chinese military base abroad, in Djibouti. This military base will secure China’s scope over Africa, protect its national interests and it’s citizens that are moving there in flocks.

While China further invests, and builds its foothold in Africa, it will be interesting to see how other nations respond. With the potential for financial and an aspect of legal control over certain parts of Africa it will be hard road in the future for other countries to engage with African nation, to buy resources. Whether or not African nations will have the ability to rise, and be more than a pool of resources for China will be something to watch as the continent gains more wealth.